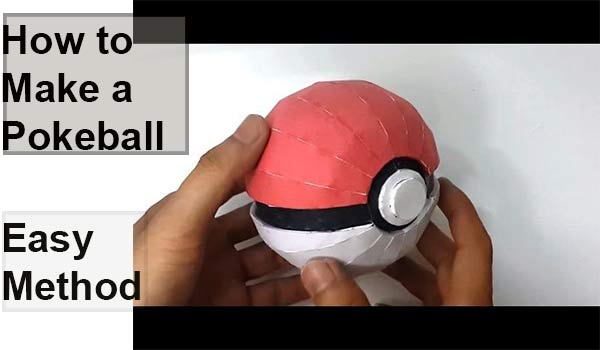 Do you know why pokemon is called pokemon? And, how does pokeball work? Before we go through the discussion of how to make a Pokeball, let's look into some interesting facts.

You know pokeballs are those technological marbles that pokemon trainers used to capture and store living creatures.

According to pokemon lore, the whole reason pokemons are even called pokemon is because we capture them in pokeballs. Yes, before these things existed, they were called Mizzou or Magical creatures.

Pokemon is a part of the western world since the modern time.

How Does a Pokeball Work

Are you interested to know a bit more about pokeballs? If you are, then this phase is for you. If you are in a hurry, you can skip this section. I have tried to let you know something that I found interesting about pokeballs.

Pokeballs are amazing to say the least. They can do some things we just cannot replicate with modern science.

For instance, in a few interpretations, they basically act as portable shrink ray but perhaps even more impressively the most common depiction shows pokemon being completely converted into energy before stored on a trainer's belt, and that might be a ten years old dream come true.

Nevertheless, as Einstein theorized with his famous equation (E=MC2) that energy and mass are actually the same things in different states. This means with the right technology; you should be capable of turning a body of mass (like Pikachu) into pure energy.

However, this is not that simple. Let's dive into a bit deeper.

Take a look at the equation again (E=MC2). If the amount of energy in something is equal to its mass, times the speed of light squared then practically any reasonable mass you plug into the equation is going to release a ton of energy.

Take Gastly here, for instance; he's currently the lightest know pokemon in existence. It weighs just point two pounds. But if you are to turn all of his mass into energy, it would still release a whopping 8.0910-15 joules.

What does that mean? Well, if Gastly is just floating in the middle of your city and you decided to convert all of his mass into energy, it would create an explosion. Which is roughly 100 times more powerful than the atomic bombs dropped on Hiroshima and Nagasaki during world war two. Quite incredible! Isn't it?

The fireball alone would be three and a half miles diameter, and over 1.7 million people would be killed. Moreover, the air blast from the massive energy release would force almost every building to collapse.

But that's all we are assuming the lightest pokemon and fail to contain the energy. Fortunately, for us, pokemon is all about containing things specifically as some experts pointed out pokeballs seem to resemble futuristic supercapacitors.

Luckily, far more efficient and capable version of capacitors we have today. You see them everywhere, in motors, computers, and video game consoles. Capacitors use two conductors surrounding one non-conductive region to contain energy in the form of an electric field.

I had to guess different types of pokeballs are probably made of different things. You will notice a non-conductive region in the middle is known as a dielectric.

Technique of Making a Pokeball

Pokemon saga is something we are familiar with, aren't we? Pokeball is the major ball for this game. Generally, this ball features a red top and white bottom and a black horizontal ring around the ball.

You can make it at your home. This is not a very big deal, but you need a few items.

You can use any round ball. Size doesn't matter. You can choose any size you would like to use. But make sure it's completely round, and the surface is smooth because smooth surfaces are easy to paint.

On top of these factors, I prefer the lacrosse ball, which meets almost every condition I mentioned above.

Priming makes painting easy and sustainable. If you are going to use an old ball, it might contain scratches, dark strains or many other things on it. In case of a new ball, it might have dark logos on it. So, it is wise and recommendable to prime your ball.

Besides using white primer, paint the entire ball with an even layer of paint.

Primer helps painting to go on for a long time. Moreover, it increases the smoothness of the entire surface.

Place Rubber Bands Around the Ball

You would use two rubber bands to mark a line out at the center part of your Pokeball. In order to lay them flat, place them around the ball. Don't forget; you need the area between them just less than one-third of the total ball.

Trace the Inside of the Bands

Take a color pencil or a pen and mark the area along with elastic bands. Mark the whole ball to create an outline for the black part of the ball. Once you have done it, take the rubber bands off your ball.

Now, take a rubber faucet washer which is just bigger than the black part of your pokeball. Use something that will help you to hold it in place. The lines you have created, it should be centered between them. The final step is to trace around the washer in both the inner and outer circle.

Paint the White Part of Your Ball

Are you going you paint for the first time? Then be very careful. Painting is fun, but at the same time, you need to be very tricky and cautious. You can start by using white paint because it is easy to cover up with dark paint if anything white over the line.

If you would like to have a bright finish, use two coat of white paint. Don't hurry; take enough time to dry the first coat properly. Remember, it won't be easy to cover your mistake.

Anyway, don't forget to paint the tiny part of your washer.

Paint the Red Part of Your Ball

Now, it's time to paint the top part of your ball, yes, the red part. Start painting from the upper line and end with the tracing elastic.

There is a reason for following up this line. As you know, black is darker than red, by any chance, if you get anything over the red, you can have a chance to correct it.

I recommend two coats of paint for it too.

Paint the Black Part of Your Ball

Most of the people focus only on red and white portion but painting the black part is equally important.

This is the center ring around the Pokeball. You have already made an outline including you washer. Paint this portion carefully.

I suggest you wait until the red and white paint to dry. Otherwise, this could be messed up.

Finish With a Gloss

In order to make your pokeball more lucrative and elegant, you need to finish with a top gloss. Basically, most of the pokeballs are made shiny.

Another important thing is painting your Pokeball one-half at a time. It will diminish the possibility of smudging the gloss.

So, you have almost done your job. Just wait for a day to get the ball dry properly.

Now, a big Congratulation to you!

Question: How can I make an Ultra ball?

Answer: The process is the same. You can just decorate it differently.

Question: Is there any alternative for rubber bands?

Answer: Yes, you can use ribbon or string, but rubber bands work well.

Question: What should I do if I don't have white primer?

Answer: First try to wash the ball ideally, or you can buy it from your nearer Home Depot or Amazon.

Question: What if I don't have spray paint?

Answer: You have to use some Acrylic paint. This is available in grocery stores or any craft or art supply store.

Answer: No. polishing depends on which kind of materials you are using. If it is metal, then it is optional.

So, as you are thinking of making a Pokeball by yourself, I have tried my best to bring up the whole process of making it. I took help from experts and professionals. You have flexibility as well as you need to maintain the basic rules and regulations.

I hope and believe this article will help you. Best of luck!

Our Selected top Beyblades for You