The pen world is full of tons of options. And a felt tip pen is one of among the crowd. It was first copyrighted by Lee Newman, which was in 1910. While this might be familiar to many of us, some others still wonder what does it mean!

Well, this special type of pen has a specific type of tip. So for the most part, there’re various types available that are intended for various uses.

What if we could elaborate a little more about what are felt tip pens and their uses? Sounds good?

Ok then, let’s hook up with that!

What Is a Felt Tip Pen? 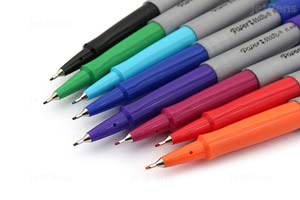 It’s a type of pen or marker whose tip is made of felt. The design is very simple with the tip connected to an ink reservoir inside. The tip type and the size might vary from one to another. And like others, a cap on the head to protect the ink from drying out.

What is Felt Tip?

Felt is a fabric material used mostly in the textile industry. It’s made of either synthetic or cotton fibers tightly condensed together. The technology is some sort of heating or moisturizing. So together they create a finish like the woolen surface of fibers.

There’re various uses of this material, such as making tents, clothes, shoes, etc. But its application for making pen tip has made a revolution in the manufacturing industries.

Because of its inside porosity, the ink flows through very smoothly and consistently, making the uses more comfortable yet effective.

The felt tip of the pen is directly connected with the ink holder. So when you write something on paper, the ink is sucked from the holder. The tip allows it to flow only when it’s wanted. Even if you keep the cap opened, it won’t flow automatically. It’ll rather get dried being in contact with the outside air.

This specific type of pen has revolutionary dye composition changes. It could be either made from toxic substances or, safer ones.

Some of the toxic ingredients include; toluene, xylene, etc. Contrarily, alcohol-based ingredients are introduced as safe to use. Also, some upgraded pens will have ingredients like surfactants, pH modifiers, thickeners, etc.

They ensure a smooth passing through the tip, allowing you to put very sharp and clean marks on the paper or anything.

Regardless of the ingredients, felt tip pen inks might be categorized into several types as follows –

If you write something with this type of ink, you won’t be able to remove it so easily. It will put a permanent mark on the surface. And to remove that, it requires the use of some kind of rubbing alcohol as found on hand sanitizers.

It dries faster in comparison to others and is considered a modern-day ink.  Because of the oil ingredient, it does possess a thick consistency. Moreover, it's water-resistant and so it doesn't smear that much. One other thing is that it allows for efficient uses.

This ink might smudge when exposed to water. In that sense, it’s less stable than oil/alcohol-based. Consequently, it’s less likely to bleed through the paper or surface. However, being water-based, they don't put any tough stains if accidentally fall on clothes or fabrics.

Now, this is very close to the oil-based inks. So it's water-resistant and doesn't easily get smudged. The only thing to consider for this type of inks is that they’ll bleed through the surface more than water-based.

What Are Felt Tip Pens Used For?

Apart from using as arts and crafting items, they are widely used for various purposes. From college or university to any home or office works, a felt tip/marker pen is essential for people of all ages.

They are great for coloring your cool craft papers, highlighting sentences, writing on boards, and so on.

Let's have a quick round-up on their pros and cons. We'll first start talking about the benefits you'll get –

1. What does felt pen mean?

Answer: It’s a type of pen whose tip is made of felt material made from fibers (synthetic or, cotton) tightly compressed together by some kind of heating or moisturizing technology. The fibers are non-absorbent, yet they hold the ink and pass through very smoothly.

Answer: Of course they do! But it mostly depends on the type of ink loaded. Water-based types are more likely to smear than oil/alcohol-based inks. So, you should make an informed decision when choosing your pen.

3. Is a sharpie considered a felt pen?

Answer: For starters, SHARPIE is a famous writing instruments manufacturer in Atlanta, Georgia. So if “sharpie” makes pens with felt, it’s obviously within the category.

So that’s the end of the article on what is a felt tip pen and its uses, benefits, and drawback, etc. We’ve tried to cover you up with all the details. And hopefully, now you feel a little more knowledgeable about it.

Yet, still, if you have any questions, feel free to let us know. And we’ll try to release modifications with added answers to your quires.